In this Religious Art Blog, we endeavour to find answers in the Religious Art History, and see if Religious Art is appreciated as a culture, and a necessary need in our modern society. Religious Artists are referred to as Fine Artists, it is interesting to see, if their work is respected, appreciated, valued and commissioned by cultures and the world’s society members?. I think as Artists, we are most interested to see, if this Fine Art Career, can earn us Big Payments, for our Future Religious Art Creations. I include a Christian Modern Art-link you can look into, which is very interesting, to find out where the Religious artists, get their ideas and inspiration, from, and the medium they prefer to work in. I will also be showing you via photos, the Religious Art Works, , which is I create for Monument Work, which people pay me well to make for them. Which are for special occasions, for their departed Family Members. Which they display, at the Family Monuments, usually for a month.

The definition of Religious Art is, according to the -(The Free Encyclopedia).  Religious art or sacred art, is the artist’s imagery,  using Religious, inspirations and pictures. These are intended to improve the Mind in the spiritual. The Sacred,  involves the Ritual of culture practices, which are the practical, and operative aspects of the Spiritual, enlightenment, within the Artist’s Religious Tradition.

The Major Religions and Art-

This is the first stage of My Religious Art Creation.  I used A3, acid free Watercolour Paper, and cut out shapes of coloured card paper and glued this down first, on the watercolour paper.

Then I had some print outs, from some other work I used to draw art in another painting. Actually it is part of the painting further down in this blog.

Then I glued these prints onto the card cut outs.

Next stage, I put a wash down of Lemon yellow, mixed with a little Yellow orange, both  colours are the Mont Marte-Acrylics-Silver-Series. ( https://www.amazon.com/ Mont Marte/Acrylics/Silver Series/Colours. )

In the following picture, I drew the Drawing with a HB Dark Pencil on to, the previous prepared paper. The sketch is from a Free stock Religious Photo, which I drew myself.

The Markers I used are the, ( https://www.amazon.com/Fine tip, Art markers/s.

Buddhist Art–Originated on the Indian sub continent following the historical life of Siddhavtha Gautama, in the  6th to 5th Century BC, and later this art practice, evolved through contact, with other cultures. As it spread throughout Asia and the world. In India, Buddhist Art flourished, and even influenced the development of Hindu Art. Until Buddhism nearly disappeared, in India, around the 10th Century,  due mainly to the expansion of the Islam Religion, alongside the Hinduism Religion.

Tibetan Buddhist Art–Often includes depictions of the Bodhisattvas. The Creation of Buddhist Art, is done as a Meditation, also as creating an Object as an aid to meditation.

In the Indian Buddhist Art- Two places suggest the vitality of the Buddhist Art, in Cave paintings, from about the 5th Century AD. One is Ajanta, a site forgotten until 1817, and the other is the Dunhuang, one of the great oasis staging, The posts on The Silk Road.

Islamic Art–A prohibition against the depicting of representational images in religious art, as well as the naturally decorative nature of Arabic script, led to the Calligraphic decorations, which usually involved repeating geometrical patterns, that expressed Ideals of order or nature. It was used on religious Architecture, carpets, and handwritten documents. Islamic Art has reflected, this balanced, harmonious world-view. Islamic art focuses on the Spiritual essence, rather than the Physical form.

Some Religious Art Text, I think are Good to Look at.

This is a Monument, Religious Art creation I created for a Deceased, friends Mother, for her Remembrance Birthday. I create Unique Religious paintings, for Monuments a few times a month, without fail. This Art work is made using Acrylics, Mont Marte-Silver Series, Colours and outlined in Fine black marker.

I have just realised that, after completing this piece of art, I did not take the finished version, I probably finished it and, gave it to my Friend. I do have a lot happening in my life all of the time, sometimes, I just do automatically and carry on. Sorry. 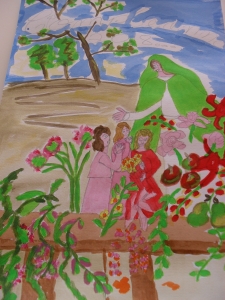 Who do The Religious Artists Supply Their Art To?—Some Artists are commissioned to produce specific pieces of art for Pay, while others sell their works in galleries, online, or in other Venues.

Are The Religious Artist Paid Well?–The Bureau of Labor Statistics – groups Painter’s, illustrators, sculptors, in the category of Fine artists. The Bureau, BLS, says, that a median annual income of $44,600, is the earning power for Fine artists. The highest paid 10% earned $90,000 per year, and a lot more. The lowest paid 10% earned $19,150 or less per year. The BLS reported, that there is a projection of 8% job growth rate, for the Fine Artists, Illustrators, Sculptors, and Painters, beyond 2020’s…

In Conclusion to this Religious Art Blog, we can say that The Fine Artist’s work is in High Demand by our Cultures and in our Modern Society. Fine Artists earn Good Money, for their work in Creating Religious Art Works. We can also say, that there is a need for the Fine Artist to keep producing a High Standard of Religious work, because the statistics say, that the demand will be increasing greatly, in the near Future and Beyond. I hope that this BLOG has given you, a new perspective on another Genre of Art Creating?… That you realise that if you are serious in making Great Religious or Fine Art, the options as Artists is unlimited, for your Art and Earning Power.

Thank you for visiting my Religious Art Blog, and for liking the BLOG. I hope I have given you another Genre to explore, and hopefully excel in. I hope you liked the Religious Art, I created to show to you, which, I Create Religiously. Have an Amazing Week, see you all next BLOG…

This is a text widget, which allows you to add text or HTML to your sidebar. You can use them to display text, links, images, HTML, or a combination of these. Edit them in the Widget section of the Customizer.