The begging’s of Anime’ or Manga?–The term Manga was created by the Artist Hokusai, a prolific artist who lived from 1760-1849, who left over 30,000 works. His new term for his artwork was made up of the words  ‘Man’  meaning  ‘in spite of oneself’,  lax or whimsical, and  ‘ga’ , meaning  ‘picture’ . The first examples of Manga, were picture scrolls created in the 6 – 7th Century created by the Buddhist Monks. In the 17th Century, Woodblock prints were popular, these depicted the Age Pleasures, such as outfits and popular places to visit. In the late 18th Century, Kibyoushi, or  ‘yellow covers’  were popular. These were stories of Adults, with Dialogue and text, placed around illustrations. When Japan opened to the outside world, the European artists, introduced Shading, perspective and anatomy, to the Comics. At the end of the 19th Century, Comic strips appeared,  in the Japanese newspapers, and comics, became very popular. During the late 1920s and early 1930s, the Japanese governments, intimidated Artists and publishers. Many Magazines, closed down, or started  censoring themselves.

After World War II, the Cartoons flourished. The first weekly magazine devoted to comics was Shounen Magazine, which was the start of the comics, in 1959. By the Mid–1960s the Manga industry started setting up, Comics, in its present form. Magazines were made for  all the Social classes of people, in Society. In 1956, Toei Animation was founded, its president Hiroshi Okawa, thought about creating its version of the Japanese film Studio, similar to Walt Disney…  It was, Tezuka Osamu, who founded his Animation company, which focused on creating Movies and Series for the T.V.  His Tetsuwan Atomu, became the first Animated Series, for Japanese television.  In the Article, ( by Liana Sharer ).

What is Anime’?– Anime’ is a term used for Japanese Animation. Anime’ covers the serious topics, for the Cartoon. In America, cartoons are Entertainment for children. In Japan people of all Ages, watch Anime’. Most Movies and shows are made for, Children, adolescents, or the young adult. There are also Anime’, made for Older people, and for Business Men. There are many Genres in Anime‘, the Basic categories, are in, Comedy, romance, action, drama, and pornography. Their is also content, for Boys and for girls.

The Art of Anime’– The art work is the deciding factor in Anime’. Huge Eyes, Brightly coloured Hair, Well-endowed female characters. Exaggerated Emotional expressions and gestures, are all typical of the Anime’ Style. The Early Anime’ Artists were influenced by early Disney characters, the Seven Dwarves, Micky mouse, and the Non Disney, Betty Boop.

The Following two Paintings, are my First Attempt drawing, An Anime’  and  Manga Girls. I would like to tell You that I use the Creatives Acid free, Watercolour paper, because I find the paper is compatible with my Art Creations. I find this particular paper, easy to use to draw and to colour, in all Mixed Media, that I like to use, and then, to finish a painting.

This is the above Painting. It is coloured in Creative, Oil Pastels, made on Creatives Acid free Watercolour paper. This painting is the before, the end painting, before I finished the painting in Sharpie Marker. 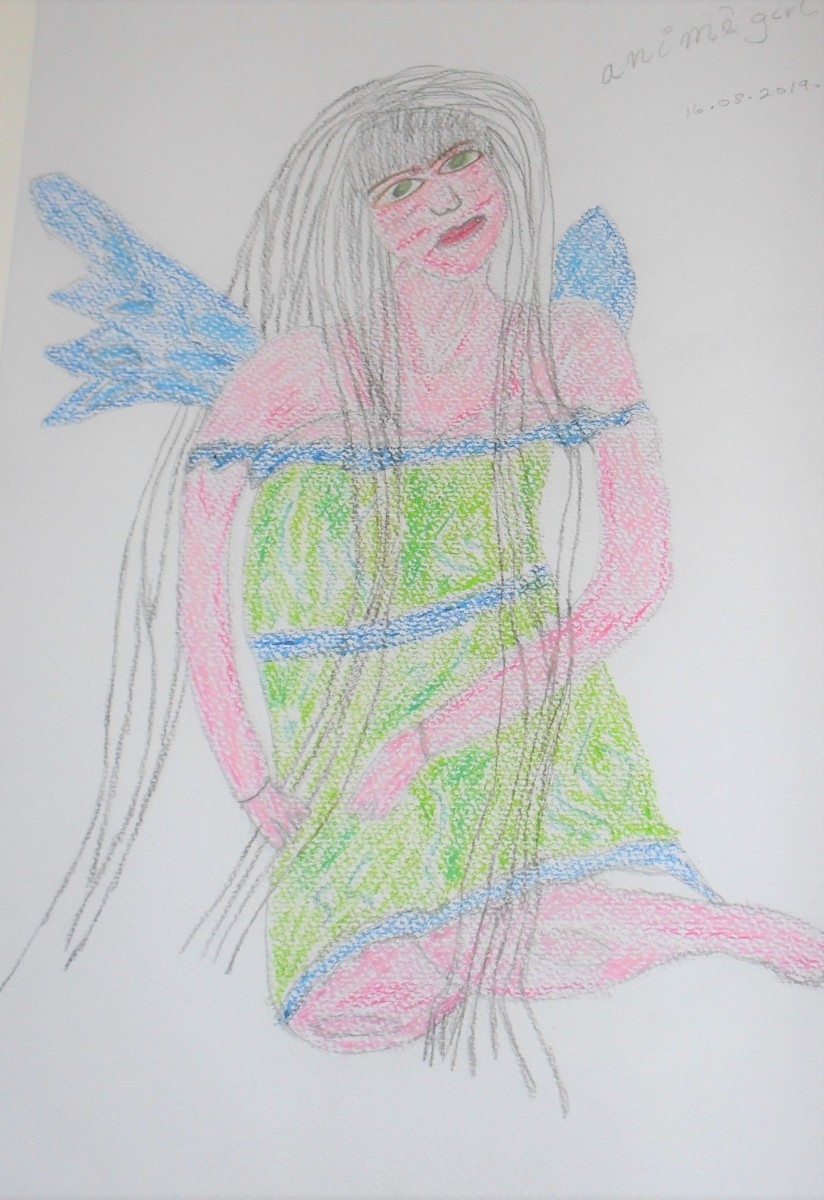 The below drawing is the drawing I initially drew, of the Anime’ Girl. The picture was an idea from a Free photo stock, photo, of an Anime’, Animation. This drawing is made in my Unique art style and technique…

Culture in Anime’–Understanding the Culture of origin is important, whether it is in Japanese, Anime’ or Manga, or in the American sitcoms ( comedies ). You have noticed? That, Characters and situations, are Totally different in each culture. Anime’ as an Art form, Expresses many things about Japanese Culture, and its people. These are in the Behaviours, of Characters, and in the Influence of religion.  These are the Two main Cultural discussions, which are Investigated, and debated, in Anime’.

The Formats of Anime’–Anime’ have original stories. Whereas other stories, and characters are taken and used from the Japanese comic books,– ( Manga ). There are many Anime’ Societies on the world wide web, if you are interested, in Anime’ or Manga, you could find a society, near your living location.    From the Anime–project,  ( anime.about.com ).

The following Painting is the pre-finished stage. The painting is Coloured in Mont Marte Silver Series, Matt Acrylic, Colours. Next stage, will be to outline the painting in Sharpie Marker.

This drawing is the initial drawing. It is made on Creatives, Acid free, Watercolour paper. The idea for the drawing came from Free Photo stock, from the internet. This drawing is made in my Unique art style and technique. I used a Staedtler 2B Black Eco Pencil, in both the drawings…

Anime’–is a better Art Quality, than in Manga. In Anime’–thirty frames are run per second, this gives a Superior Quality to the Anime’. In Magna–panels are used to draw the images, in which, there is more space available, to place the words.

Has Review, rants, quotes, pictures, drawings, good websites dedicated to Anime’ and Manga, and other texts, with reviews, on wattpad, or in other sites.

What is the Drawing Technique used, to learn to draw Anime’ and Manga–The Maquette, or Shape-Based Drawing, is the easiest way to learn to draw most things. By reducing complex forms, to simple shapes. This form of drawing, is referred to by other names, such as Construction, Anime’ or Manga. This is the Exact Technique, used By Most Animators. The first step with Maquette drawing, is to reduce the Proportions and Shapes, to a series of Rectangles, and Circles.

Hi I am Marie. I am an Artist and Blogger, Great Researcher, Writer and a Genius Artist. I love to read, Informative Texts, and Artist Magazines. I like to read all the latest Information On the Newer Technology. I like to Draw and paint in Alive Colours. I Love to Dress up and I love to go out Socially. I like the Parks and The Beach. I Like to Eat, more Plant Foods. I Like to Garden Greatly. I Like to be around People. I avoid and stay away from Negative People and Places, because it unbalances my Mind and My Body. I Look forward to keeping in Touch with YOU... View all posts by artcreationsbymariec.art

This site uses Akismet to reduce spam. Learn how your comment data is processed.

This is a text widget, which allows you to add text or HTML to your sidebar. You can use them to display text, links, images, HTML, or a combination of these. Edit them in the Widget section of the Customizer.